Since this is sourced from planning notes, there are a lot of brackets with extra information.

The young (relatively speaking) King Rhye had a habit of abandoning the throne for the first fifteen years of each of his children’s lives, and leaving the kingdom to a hand-picked, voted individual.

Chloe’s childhood was therefore easy and carefree. She spent a lot of time in the northern woods with her family (Immediate and extended). The north wood was (and is) a mystical haven of sorts, technically owned by her uncle, Prince Rhye, and previously resided in by his wife.

Chloe was free to associate with and learn about her family, nature, and the wisdom of those around her. Her parents, Rhye and Gwenhime, had four children before her: Zealott, Natasha, Kent, and Janna. 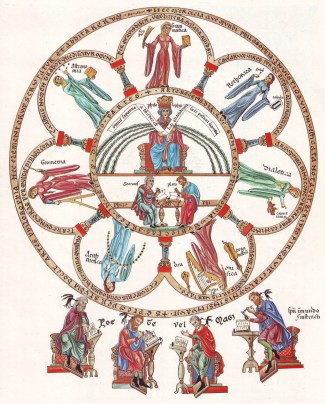 At fifteen, Chloe Rhye was moved back into the Solune kingdom’s capital city, Murdock. The family’s return to the city was a culture shock of sorts. The experience was redeemed by the completion of her literacy, and the discovery of books.

In only five years, Chloe became more well-read than anyone in her family. During those years, she began to mature physically, and her ageing began its slow down to the rate of the rest of her family.

During this time, she took a degree in the seven Liberal Arts—

“Grammar, logic, and rhetoric were the core liberal arts (the Trivium), while arithmetic, geometry, the theory of music, and astronomy also played a (somewhat lesser) part in education (as the Quadrivium)” (E. B. Castle, Ancient Education and Today (1969) p. 59)

—although, at the Solune Academy, the Quadrivium is composed of arithmetic, geometry, natural studies, and civics. Shortly after, Chloe returned to complete a degree in history, although she found it somewhat disappointing.

By the end of it her decade of education, her aging had slowed down to that of the rest of her adult family (about 1/100th the normal rate.) Chloe became a well-rounded citizen ready to take on the world.

Chloe did not take on the world. Instead, she retreated into the city’s libraries and continued reading. She lived the kind of “life of ease” that only a distant-heir prince of the throne could afford to. However, despite her low Conscientiousness, Chloe’s high Self-Discipline and moderate Achievement-Striving kept her learning throughout her early adulthood.

Chloe’s personality psychometrics. (openpsychometrics.org has, in my opinion, only moderate reliability. Despite this, the metrics mostly agree with my current perception of Chloe Rhye.

A century passed, and she took on an intellectual apprentice named Zeth. After decades of learning together, they managed to develop what would become the field of physics.

When he died of aging, she was finally faced with the immortal’s dilemma. Instead of accepting that people die, as her siblings Janna and Zealott had, or focusing on career and broader pursuits as her sister Natasha had, she used it as an excuse to turn further inward. She ordered a hundred years worth of imports and also began learning new languages. She also educated herself in kemia and biology, which she found built on physics, and both of which she found more interesting. At the same time, Her oldest brother Zealott was exiled for a few decades.

During this time, the King did what he could to urge her out of the castle, and out of the books, but he was either ignored or subverted. She went out to the academy and the library, she would tell him.

When the King’s Agents reported threats from the north, her habits were jarred due to a couple of synchronistic events. First, Chloe was getting sick of second-hand information. Second, the King, her father, decided to send her as an envoy to recruit Plainkind to help defend the kingdom.

A small group of young warriors were assembled, and Chloe was chosen as to become one of them. Suddenly, she had a group of friends.

After the Legendary event, the walls of the Solune Kingdom opened for the first time in a thousand years—the first time in her life. Chloe and Yaska May Däwngale, the only Plainkind she had managed to recruit, remained friends.

After the walls fell, Janna, Chloe’s closest sister, both in relationship and in age, left to find Zealott, and Yaska left to explore the east.

Alone once again, Chloe returned to the academy and completed a degree in Rhetoric and Poetry (the equivalent of a Doctorate in Law)

Janna returned two short years after leaving. She returned a failure and with criminal charges. Chloe defended her in the Solune court. (Note: The current draft of Evidence has Chloe representing the plaintiff (Natasha/the Law), not the defendant (Janna). This is to be altered in the final draft.)

This is where Chloe is at the moment, narratively wise.

She intents to go to the Underside in order to learn about the Lussa people. Instead, she gets caught in a political struggle.