This review is a second draft of a post from my first blog. It was originally released two years ago. I’ve omitted the parts that I now blatantly disagree with, and have put in [square brackets] some other parts that I want to comment on.

Later, I’ll be releasing a review of the second series, the Heir and the Crown. So far, I like it much better, but I’m not very far.

I must be a very boring person, because whenever I try to share my interests, they get passed over and ignored by my friends. [In the two years since I wrote that sentence, I’ve come to realize that the reason I don’t share interests with my friends is because they are nerds and I’m an artist.] Anyway, I made a deal with a friend. We book swap and do reviews, I gave her Ookami to Koushinryou (get em hooked on a series, right?) This was not a bad book (it really wasn’t). [the rest of this sentence was cut.]+

The Selection seems to be written as some kind of dizzy wet dream for whoever the target audience was. The audience did not include me, but I have to say that the book did it’s part to keep me entertained. Here’s the run down. A bunch of girls are sent to the castle to do a not-that-weird dating game with the prince. he can’t go around courting girls since he’s so busy doing prince things (which we never read about), so he brings the girls to him. He befriends the main character after she knees him almost in the groin and it’s all uphill from there. Let’s break this down, and then at the end I’ll [break out] the feminism terminology, since I’ve studied feminist critical theory and I’d love to try it out outside of class.

Looking back on it now, the main character is your typical “out of place teenage girl” with a punky attitude, also fairly typical. She does what she wants and is NOT interested in the main love interest, Prince Maximillion. (it’s actually Maxon, but you know what the author was going for.) I thought this was interesting, but then I remembered that two different Anne Hathaway movies already did this, Ella Enchanted and Princess Diaries II. Not that original. Their encounters are pretty generic, but still manage to be interesting enough that I kept reading.

[Keep in mind that it takes a lot to keep me reading a book. I prefer audiobooks. Nowadays, only Michael Crichton and Madeline L’Engle have presented anything compelling enough to keep me turning the pages. I actually put down Harry Potter, and would not have finished it if it weren’t for the audiobooks. I don’t really like Rowling as an author. I think this whole issue was created because I went to school to study English, and everything I read was of much higher quality, so I can’t switch back. I’ve been spoiled by the English Canon!]

The rest of the selection gets weeded away as the book progresses, making one think that the author chose too high a number (35) and didn’t want to do editing or draw it out too much. You can guess from the start, based on character development, who is safe and who will get cut. The main character is safe, although the book would have been interesting if he sent her home at the end of the first book and the second was from Mixon’s perspective (trying to politricks her back in). The main character’s friend, Marlee, is also safe.

There seems to be some kind of weird political subplot. This is a post WWIV world, where America has been lost to monarchy. It’s weird and I feel like the main country Illéa is the real bad guy. There are attacks from the rowdy North (Canada?) and from the deadly South .(Mexico? Due to Racism?) Nothing other than rebel attacks come up for politics in this book. It’s probably the most intriguing thing about it.

Apparently in a post WWIV world, men still expect to be the bread-makers (pg 50). Aspen does nothing but insist on such patriarchy. “I am a man, I’m supposed to be a provider”

Delicacy, nice hair, a nice dress, and so on… is what really make you a lady, still? After around a hundred years women are still defined by such meaningless and out of control features? Why?

“I wouldn’t call leadership one of my strong suits,” despite the fact that she seems appropriate for the task, the author makes sure the reader knows that America (the main character) will never rule.

Maybe I’ll get the audiobook of the second, if only to exercise my feminist criticism.

[I was a fairly fervent feminist in the twelfth grade when I wrote this. Even now, I’m all for equality, but I’m a little less… aggressive about the patriarchy. If anything, I’d say I’m probably one of the few feminists that is willing to question the patriarchy’s existence. It’s a divisive and dangerous theory.]

When I first started listening to The Elite (audiobook), I was expecting more of the first. Which isn’t bad, but certainly isn’t good, as you read above. Anyway, The Elite was a fantastic book. So good and so overarching that I go as far as to recommend you SKIP the first one. You simply don’t need it, nothing important happens. It’s like that one boring chapter in a book that adds nothing.

In The Elite, the main character, America, continues with the selection, competing for the prince’s hand in marriage. The difference is that instead of having 20+ flat, one dimensional contestants (and Celeste), there are only six. It’s like the Dragonball world tournaments, where we’ve moved on from the qualifiers (which they started skipping, because they are boring and pointless) and gone to the full tournament. The fights, err, competitions are meaningful and the opponents have purpose! You learn about the competitors and the competitions are actually relevant, like when they have to make banquets for foreign visitors. My favourite element of The Elite and its sequel, the One was the rebels. It turns out that I’m not the only one who though that this aspect was interesting. You delve deep into why the United States has become a monarchy and the differences between the two rebel groups. You meet rebels, instead of them just being people who attack and destroy. You finally get to see their full destructive potential, before it’s washed off of the walls.

This all continued into The One very cleanly. It felt like the same book, but in a good way. The girls got whittled down to four, then three. My favourite character, Celeste, finally got redeemed. I was hoping we’d get to see the side of her I liked and excited when it happened. The ending of The One, however, was terrible. I could tell it was rushed. It was like the author thought, “How can I get the king out of the picture in case I need a sequel?” or “How can I make sure that they have no guidance when the ascend, in case I need a sequel?” AND now my favourite can’t appear in any of those supposed sequels. Just, very aggravating. 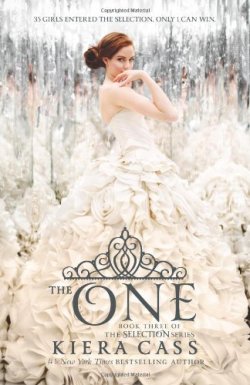 Now I’m going to talk about the upcoming book, err, it’s actually out. This time we focus on the child of the two main characters from the previous trilogy. I have only heard reviews, so here is my impression and thoughts. 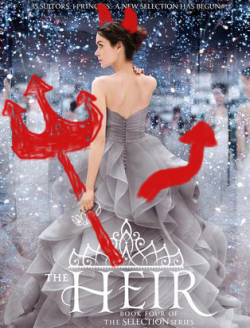 I am very disappointed that we aren’t sticking with the old couple and doing ANOTHER SELECTION. I know there’s a twist, since it’s a reverse harem this time, but STILL.

I am going to give this (audio)book a chance though, and judge it for what it is, not what I wanted it to be.